At the resource level, the SData algorithm only tracks the last modification: a single (Ni, Ti, Si) triplet where Ni is the node where the resource was last modified, Ti the tick at that node when the modification was detected and Si the modification timestamp (to solve conflicts when priorities are equal). This is less expensive and easier to implement because the synchronization metadata can be stored in a syncdata table with a simple one to one join to the resource table.

The collection level vector clock is called “digest” in the SData terminology. The SData digest is actually an “extended” vector clock made of triplets (node id, tick, conflict priority).

The following diagram shows how the sync metadata is organized at the collection and resource level: 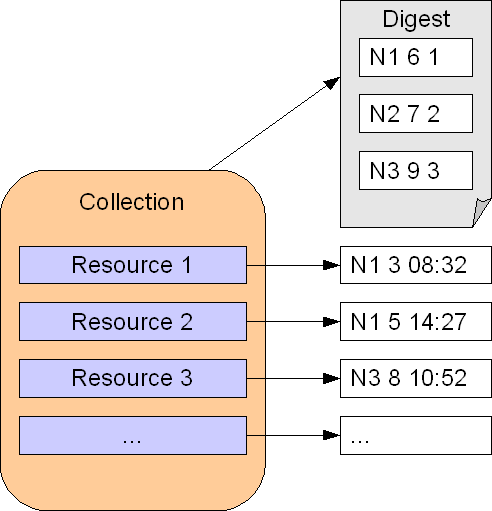 This variant of the vector clock algorithm assumes that synchronization is performed one collection at a time rather than one resource at a time (although it can also be used to propagate changes on individual resources, under certain conditions).